What is Tetralogy of Fallot?

The easiest way to think about tetralogy of Fallot is to visualize the lower wall of the heart, the ventricular septum, as 2 different pieces. Normally the upper piece fuses with the lower piece during development of the heart in the womb to form an intact wall. With tetralogy of Fallot, the upper wall gets out of alignment with the lower portion of the wall during development of the heart. It swings foward, towards the pulmonary valve, and thus creates obstruction or narrowing in blood flow out to the lungs.

The cause of tetralogy of Fallot, as is the case with many congenital heart defects, it is not clear. Certainly genetic factors may play a role. Tetralogy of Fallot can be found in conjunction with certain syndromes, for example DiGeorge syndrome. However, it may likewise be found in otherwise perfectly normal children.

Tetralogy of Fallot occurs in approximately 5 out of every 10,000 births.

Tetralogy of Fallot is a cyanotic heart defect. The term cyanosis means a bluish discoloration of the skin. The cause of cyanosis is a lower than normal blood oxygen level. Children with tetralogy of Fallot are at risk for cyanosis because the narrowing of blood flow to the lungs in combination with a VSD or hole allows blood in many instances to bypass the lungs and go directly up to the body. The severity of cyanosis, and therefore the severity of symptoms, is determined by the severity of pulmonary stenosis. Babies with more severe pulmonary stenosis are usually very cyanotic at birth and often need immediate attention. Children with less significant pulmonary stenosis may have normal or near-normal blood oxygen levels and may be seemingly fine at birth and for several months thereafter. In this case, the child is often identified by the presence of an asymptomatic heart murmur.

One of the risks of tetralogy of Fallot is what are called tet spells. A tet spell is an episode in which a child or infant becomes extremely blue and frequently agitated and out of breath. The spell is caused by a relatively sudden decrease in blood flow to the lungs. Tet spells can be precipitated by a number of things, including dehydration, agitation, or fever. Some children may have spells in the absence of any identifiable cause. Treatment of tet spells includes calming the patient, and administering oxygen or fluids if available. In many instances placing a child in what is called the knee chest position will assist in terminating a spell.

Even in the absence of symptoms, tetralogy of Fallot ultimately causes significant problems in a number of ways. Long-standing cyanosis causes the body to produce more red blood cells. Over time this can clog the circulation and lead to several long-term negative consequences. In addition, the presence of a hole in the middle of the heart can predispose older patients to strokes and infections. Finally, the presence of long-standing pulmonary stenosis can cause thickening and ultimate failure of the right ventricle.

Many cases of tetralogy of Fallot in this day and age are identified prenatally. A fetal echocardiogram can often demonstrate the findings as early as 18 weeks gestation. In babies who are not detected prenatally, tetralogy of Fallot may be suspected based on the presence of a heart murmur and accompanying cyanosis. The definitive diagnosis is typically made by an echocardiogram. An echocardiogram uses sound waves to visualize the structures of the heart. Occasionally a cardiac catheterization may be necessary as well to better delineate specific details of the heart anatomy. 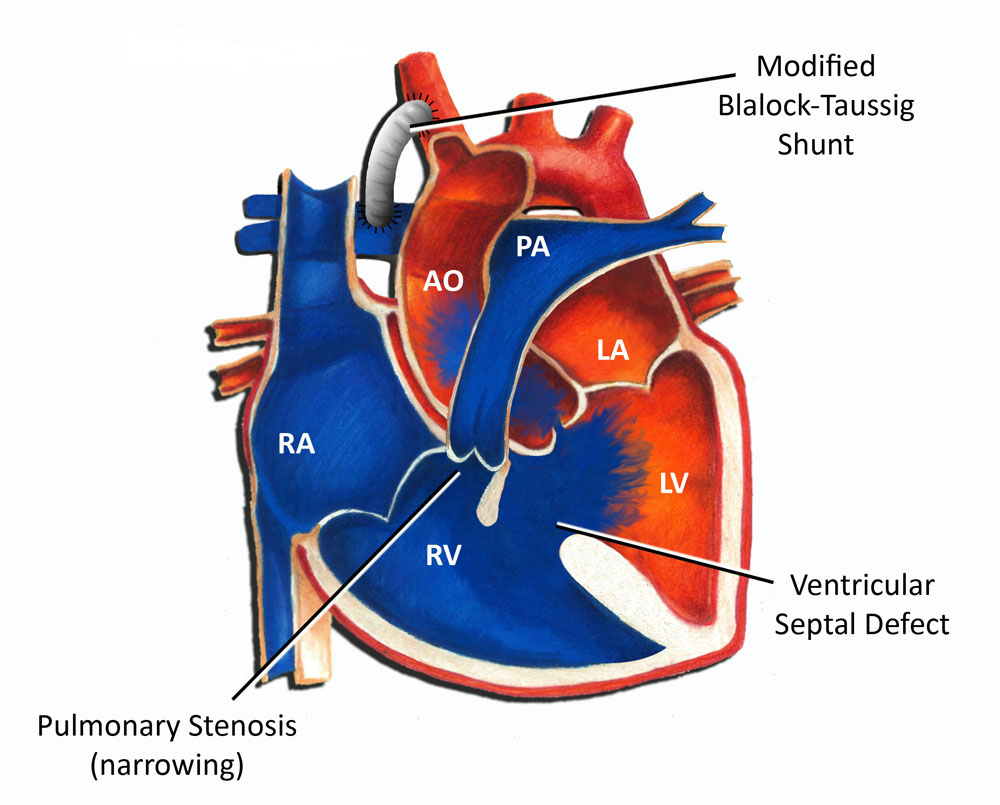 Because of the potential long term complications, surgery for tetralogy of Fallot is always recommended. In the absence of any symptoms or significant cyanosis, surgical repair is usually performed sometime in the first year of life. Often allowing a child to grow for several months can make the surgery technically easier and allow for a better outcome. In babies who are born with significant cyanosis, intervention is usually needed early on, often in the first week of life. Usually this takes the form of a Blalock-Taussig shunt. Originally performed by Drs. Blalock and Taussig in Baltimore in 1944, a shunt is simply a connection between the systemic circulation and the pulmonary circulation (see Fig.1). A shunt allows for blood to gain access to the lung bed in order to obtain oxygen. Originally shunts were performed using a child's native blood vessels; in this day and age they are performed using artificial material.

The vast majority of children in this this day and age who undergo surgery for tetralogy of Fallot do very well. Most older infants require hospitalization between 4-7 days and usually have recovered nicely by the time they are discharged. The long-term prognosis of children with repaired tetralogy of Fallot is very good. A portion of patients with long-standing pulmonary valve regurgitation will ultimately require replacement of the pulmonary valve, usually as teenagers or young adults. Even with this, however, the majority do very well with normal development and little if any limitations.