Transposition Of The Great Arteries

What is transposition of the great arteries?

The aorta and the pulmonary artery are the two main arteries ("Great Arteries") that carry blood away from the heart.  In the normal heart, the pulmonary artery is connected to the right ventricle and carries oxygen-poor blue blood returning from the body to the lungs, where it becomes oxygenated.  The oxygen-rich red blood returning from the lungs passes into the left side of the heart where it is pumped by the left ventricle out the aorta. In the normal heart, circulation to the lungs (pulmonary) and the circulation to the body (systemic) are in series, forming one continuous circuit that crosses in the heart, like two rings fusing to form a figure 8. 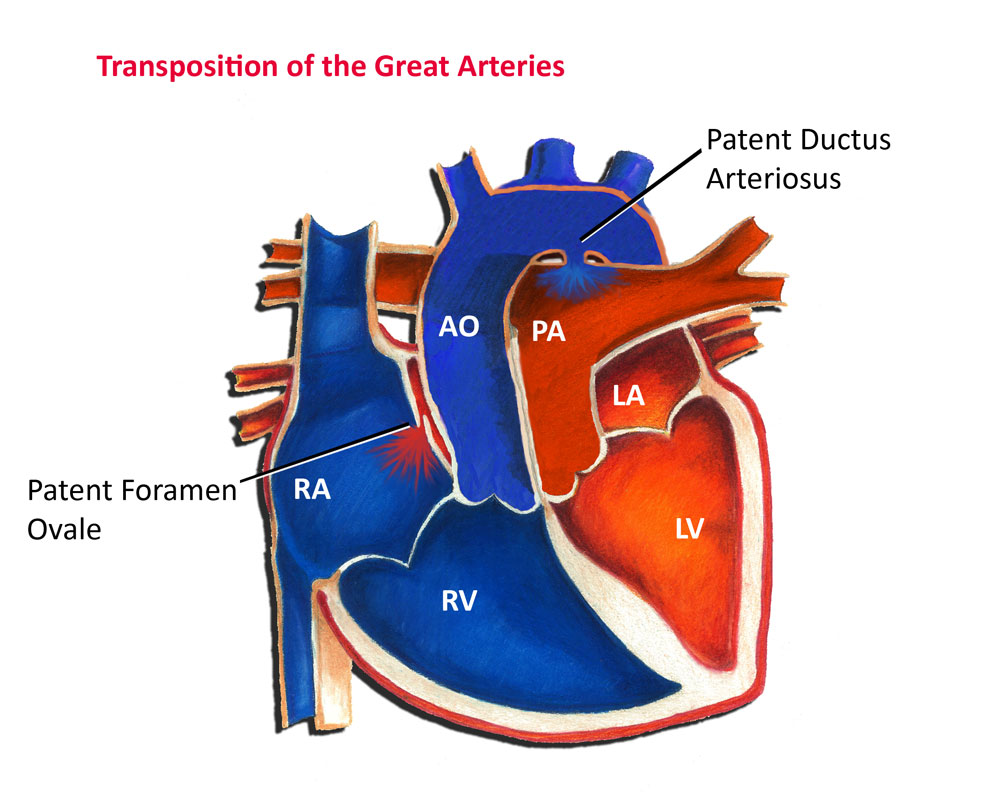 Most fetuses with transposition of the great arteries survive just fine, primarily because oxygen in the fetus is supplied by the placenta as opposed to the lungs. In addition, the fetus has two unique communications, or shunts, between the pulmonary and systemic circulation that allow the red and blue blood to mix.  These special shunts are the foramen ovale and ductus arteriosus (see Fig. 1).  The foramen ovale is a small flap-like valve between the two top chambers of the heart, the left and right atrium.  The ductus arteriosus is a small artery that bridges between the pulmonary artery and aorta. These shunts assist in allowing red and blue blood to mix.

Once a child is born, he or she becomes immediately dependent on the lungs to supply oxygen to the body. The presence of transposition of the great arteries is usually a grave emergency, as it is impossible for blue blood to pass into the lungs and red blood to pass to the body. The presence of a patent foramen ovale and patent ductus arteriosus are typically the only factors that allow an infant to survive immediately after birth. As these shunts begin to close, an infant quickly develops significant cyanosis, or a blue discoloration of the skin, due to inadequate oxygen levels in the body. Untreated, over 50% of infants with transposition will die in the first month of life, and 90% in the first year.

This condition occurs in approximately 5 out of 10,000 births.  It is typically not a genetic condition passed from generation to generation.

Diagnosis of transposition of the great arteries can be made in number of ways. Some cases are identified prenatally through the use of a fetal echocardiogram. Other cases are identified after birth, usually in the first few hours or days of life due to cyanosis.  Babies with certain cyanotic heart defects will characteristically remain cyanotic despite being given oxygen, which is a clue to the physician that there is a serious congenital heart defect, such as transposition.

Other heart defects may occur along with transposition of the great arteries. About 25 percent of children with transposition will also have a ventricular septal defect (VSD). In nearly a third, the branching pattern of the coronary arteries as they leave the transposed aorta is unusual. Some infants may also have a narrowing at or below the pulmonary valve (pulmonary valve stenosis) which blocks blood flow from the left ventricle to the lungs.

The diagnosis of transposition of the great arteries, and any other associated heart defects, can be readily made by an echocardiogram at the bedside.  On rare occasions, a baby may require a cardiac catheterization to establish the diagnosis of an associated coronary artery anomaly.

Treatment of transposition of the great arteries involves two phases.  The first is immediate stabilization of the patient, followed later by corrective surgery. In many cases, the baby may be gravely ill due to lack of oxygen. The immediate priority is to keep the foramen ovale and ductus arteriosus open to allow mixing of blood between the pulmonary and systemic circulation.  The foramen ovale may need to be enlarged by a specialized procedure termed a balloon atrial septostomy (see Fig. 2). In this procedure, performed via a cardiac catheterization, a balloon tipped catheter is passed from the vein in the groin into the heart, and the foramen ovale is enlarged allowing for better mixing of blood between the atria.  This procedure can be performed in the emergency room, in the intensive care unit or in the cardiac catheterization laboratory. Likewise, the ductus arteriosus can be reopened, and maintained open, with an intravenous medication, prostaglandin E1 (PGE1).

Although babies can be stabilized temporarily, surgical correction of the defect is always necessary. In most cases, corrective surgery is typically performed in the first week of life, once an infant has recovered from any instability that occurred during the initial presentation. In more complex cases, such as those with narrowing below the pulmonary valve (pulmonary stenosis), surgical timing is variable.

In most cases of transposition of the great arteries, an arterial switch operation is performed (see Fig. 3). The arterial switch operation involves cutting off the aorta and pulmonary arteries just above the point where they leave the heart, and reconnecting them to the proper ventricle. The valve stays attached to the ventricle, so that what was once the pulmonary valve is now the aortic valve and vice versa. 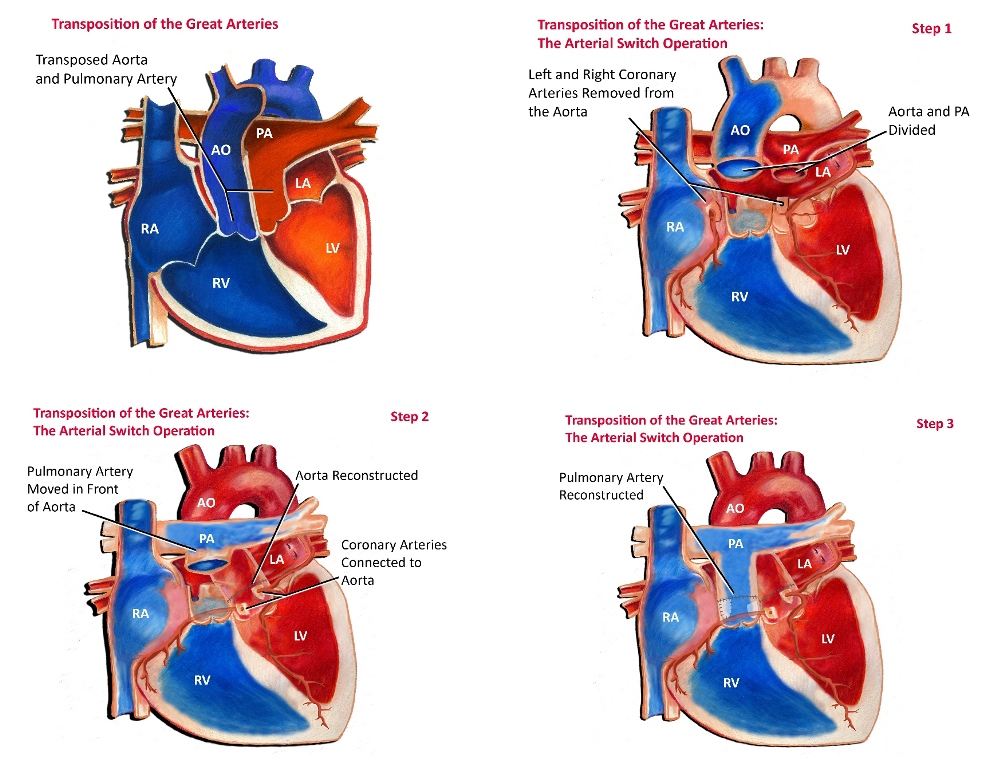 Since the coronary arteries must stay with the aorta, they must be taken off the area above the valve and reimplanted separately above the new aortic valve. This is often the most technically challenging part of the operation, particularly if there is any unusual branching of these arteries. Closure of ventricular septal defects (if present) and atrial septal defects are also performed as part of the operation.

Occasionally, in more complex cases of transposition such as in those with narrowing below the pulmonary valve, the arterial switch operations is not recommended. These cases often involve complex decision making on a case-by-case basis to determine the best options and operative plan.

The survival of children with transposition of the great arteries has improved dramatically over recent decades. When there are no unusual risk factors identified, over 95% of infants successfully undergo surgery in the newborn period.

Since the arterial switch operation reconstructs the heart to a near normal configuration both anatomically and physiologically, long-term cardiac survival and function is typically excellent.

In a small percentage of children, narrowing (stenosis) may occur at the site that the pulmonary artery was reattached. The narrowing may occur months or years following surgery and may require intervention. Options for treating this narrowing include cardiac  catheterization with balloon dilation of the narrowed area or reoperation, depending on the characteristics of the narrowing.

Even though patients are expected to do well after arterial switch operation, long-term follow-up with the cardiologist is important to detect problems early. This follow-up often consists of regular physical exams, periodic echocardiography, and perhaps an exercise stress test when a child is old enough to perform this test.

In summary, although transposition of the great arteries can be a life-threatening problem, fortunately in this day and age it can be successfully treated.